Legend of the Soviet car industry Volga GAZ 21: mark the wedding and other celebrations brightly!

This Volga is a perfect for those who want to plunge into the atmosphere of 60-70th years of the XX century, stand out in the flow of modern machines. Our car in a rare red color will suit you as well as possible, will become an amazing decoration of any motorcade!

In addition to the attractive appearance in the retro style (cream-colored upholstery in the cabin, modern cast wheels), our “Volga” is also characterized by its comfort, equipped with a powerful and high-quality audio system. Beautiful music, chosen according to the mood of the holiday, pouring from CD-player, or radio, will create the appropriate atmosphere of the holiday, will make the event in the style of “classic” even more realistic and memorable.

It is the real symbol of the USSR automobile industry, a real limousine of its time. This Soviet car has received recognition in other countries around the world. So, for example, almost immediately after the release in 1958 GAZ 21 won the Grand Prix prize at the international Brussels exhibition. Foreigners as soon as they did not call the Russian Volga – and “tank on wheels,” and “workhorse,” and even “a tank in dress coat.”

If you decide to rent a “Volga” for a wedding, or some other festive event, then you probably will be interested to learn that the car of this brand also “lit up” not only on the roads of the USSR, but also in many Soviet films of that period. For example, this car can be seen in the famous movie “Beware of the car”, where the Volga played the main role, as well as in the fantastic “Black Lightning” A. Voitinsky. Do not deprive her attention and foreign performers. The car was shot in their clips by mega-known music bands, such as Megadeth and Rammstain. 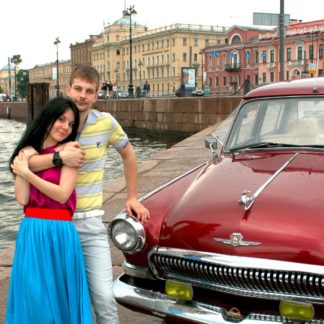